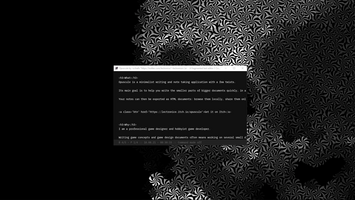 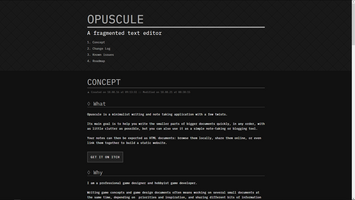 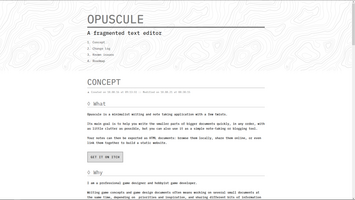 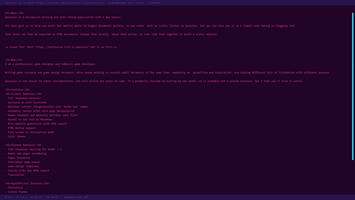 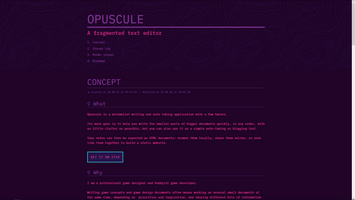 I've been working on this tool since a few months, without prior knowledge of Godot, except through RPG in a Box, an excellent Godot-based voxel game engine. And I have to thanks its developer, Justin Arnold, who helped me more than once and gave me valuable insights on Godot's inner workings. Opuscule would be in a much more primitive state without him.

To be honest, I'm quite surprised I made it this far. Regarding programming, I'm just a self-taught hobbyist who has been struggling with basic logic for years. But it seems I've learned a few things along the way. In fact, I started this project because Godot's VisualScript looked easy to learn and perfect for me. It wasn't. I had a hard time understanding its most basic concepts, and its visual approach didn't help the slightest. I found it quite confusing, but to be fair, it's still very new, and lacks tutorials and documentation.

So I boldly decided to give a try to GDScript, Godot's Python-inspired native language, thinking I'd fail even more miserably. Oddly enough, I found it way easier to grasp than VisualScript, and quickly managed to get something to work after a bit of trial and error. I wanted to create a simple note taking tool that would be able to switch between various files on the fly and autosave any change. I ended up developping exactly that, refined the concept a bit, and started to add various small features.

In case you're wondering, yes, Godot is awesome. I drastically improved my coding skills since I've started to use it, thanks to GDScript, a neat IDE, and an actually useful debugger.

This is how, against all odds, my dead simple note taking tool idea became a multiplatform mini-website generator with Vim-like controls (I've never used Vim, by the way, so I probably should...)

Opuscule is still in alpha. There's a lot more to come. It's pretty stable, and I'll do my best to avoid any breaking change, but keep in mind things may break. Don't forget to backup your data folder, even if there's already automated backups.

I'm developping this tool on my free time and share it for free. Don't expect it to suit all your needs, it's designed to suit mine. However, I intend to make it as easy to use and as useful as possible, so feel free to provide any feedback and suggestion. It may become open source in the future, but I have a lot more work to do before that.

Last but not least, here are two important URLs to bookmark:

It's awesome to see how much progress you've made on this, and happy I was able to help out! :)

I still have a few major features to add: I'm currently adding commands to move books and pages around, and I'd also like to add a simple way to import/export source text. And a backup system that doesn't suck. And... well, you get the idea :) On the other hand, I'm definitely looking forward to work again on Phalanstery. I guess I'll do both!